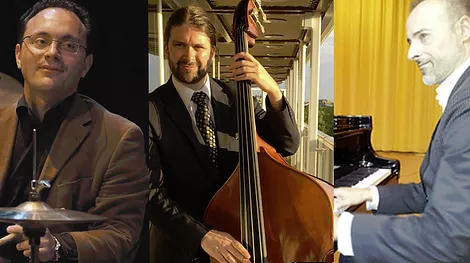 Hailing originally from Montreal in Canada, Eric Guy did the rounds in rock bands as a teenager before enrolling in the Jazz program at Vanier College, where he studied electric and acoustic bass with session veteran Vic Angelillo, arranging with Christopher Smith and composition under Joe Sullivan. He cut his teeth playing jazz around town with long-time friends and guitar virtuosos Jean-Sebastien Williams and Simon Angell (Patrick Watson), and the CJAD All-City Big Band under Denis Christiansen, amongst many others, and played in every musical situation available, from hip-hop to gipsy music, and everything in between. He also made a mark in the Hip-Hop/RnB session scene, notably with El Verso, whose singles have been getting massive airplay. In the period between 2002 and 2007, Eric sailed the high seas for parts of the year, playing bass for the luxury cruise lines Celebrity and Crystal Cruises, culminating in his appointment as bandmaster and musical director in 2006 on the Crystal Symphony. All the while, he continued to study privately with the likes of Rufus Reid, David Friesen and UK electric bass virtuoso Janek Gwizdala. His growing interest in composition and orchestration led him to delve deeply in the music of Schoenberg, Shostakovich, Mingus, and countless others, as well as completing a MIDI orchestration course under Ben Newhouse at Berklee College of music. Since moving to London in 2008, Eric Guy has been making his mark in both the Jazz and Pop scene, notably playing with Anton Browne, Mike Coates and Duncan Eagles in the jazz side of things, and with session ace Chris Madin (Strictly come dancing) and chart-topper DJ Ironik in the pop world.

Buster Birch has an honours degree in music from the University of London and a post-graduate diploma in jazz performance from the Guildhall School of Music and Drama. He has performed at virtually every major concert hall and jazz club in London as well as major international festivals and toured in over 30 countries and recorded over 30 CDs. He has worked with many of the UK’s finest jazz musicians as well as The Royal Philharmonic Symphony Orchestra and deputised on West End shows. He is the drummer for ARQ (Alison Rayner Quintet), winners of the Parliamentary Award for “Best UK Jazz Ensemble 2018”. He is an award-winning jazz educator and has published 19 books on music tuition. He has his own critically acclaimed show “Buster plays Buster” featuring his own jazz quartet playing live to screenings of classic Buster Keaton movies for which he has arranged and scored all of the music.