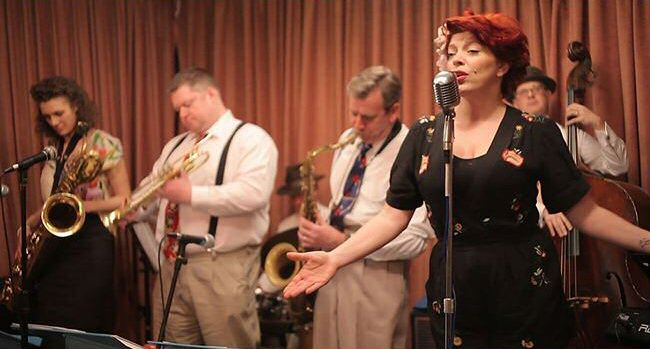 Blue Harlem have been widely regarded as one of the top swing/jump-blues bands on the London scene for over 15 years. They have become regular favourites at venues such as the world-famous Ronnie Scott’s, The100 Club, The Hippodrome, Hideaway, Jitterbugs and many, many more. They enjoy an international reputation – 2007 found them launching the 4th International Film Festival of Dubai and in 2008, they were personally invited by Baz Luhrmann to perform for the launch of his 1940’s blockbuster movie ‘Australia’. They have been invited on three separate occasions to perform at Highgrove House charity balls for the Prince’s Trust. They have an enviable reputation as a party band, having played for society soirees all over the UK – including Buckingham Palace, Annabel’s, The Sands Venue and Burgh Island. They also regularly perform abroad, appearing at jazz festivals in Spain, Norway, Belgium and Germany. Blue Harlem launched the career of rising star Imelda May, and are now proud to feature as their vocalist the sensational Sophie Shaw. Blue Harlem is led by Al Nicholls on Tenor Sax.

“This experienced outfit bring an intelligence and sophistication to the art of combining jazz and rhythm and blues that was prevalent on America’s West coast of the 40s and early 50s.”
Ronnie Scott’s Jazz Club

“Blue Harlem are guaranteed to get your adrenaline flowing with their brand of high energy big band swing and R&B that would have been equally at home at the Apollo or the Savoy in the 40’s as it is today.”
Tony Watson, Blues and Rhythm magazine

Tickets £10 on the door or £12 in advance from Eventbrite